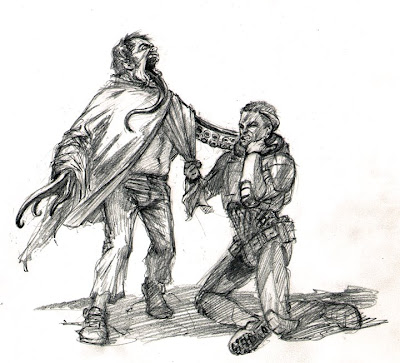 Drew this as a continuation of the work I'm doing on that game project. The above sketch was drawn slightly smaller than the head shots I posted yesterday, so I already couldn't get as detailed, but I also only had the most general idea of what I wanted to draw.
There are a number of ways I start to work when my result is merely a glimmer in my imagination. I can do a few dozen really tiny gestural sketches (graphite) or silhouettes (marker) until something clicks, I could do 10-or-so larger drawings with a big fat pencil one a page of 8.5 x 11" bond in a 15-minute set time or I could do what I did above and just doodle until something emerges. A great number of the really faint initial lines aren't showing up in the scan; the first marks trying to get a feel for the energy and gesture of what I'm starting to piece together. When something is close enough it becomes good enough for this drawing and, as a result, I get a pretty mediocre final piece, but that's fine for my purposes.
I now have an idea of what I want this image to be and, if I decide it can be used, I can now redraw it knowing what my result should be. I can fix their relative proportions, change their gesture so it's more dynamic and desperate, pose them so the relative character information is more easily read. Decisions like the weirdly placed right leg don't get left as is since I now know the intent and focus of what I'll be drawing if I decide this image is even worth pursuing. One of the things that surprises a number of people coming to concept work is the sheer volume of drawing that's purely developmental; you may do 10-400 drawings of something, each building or deviating from a previous batch of drawings until you get to something the client likes.
That being said, the above was the tenth or eleventh drawing I did today along these lines and the only one I felt contributed anything to what I'll do next.
Draw lots and learn to draw fast.
~R
Posted by Unknown at 00:03