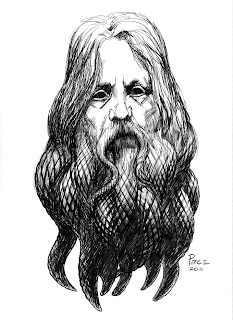 (This went on far longer than I intended and is likely rife with errors, I apologize for both, but wanted to type while the thoughts were there instead of waiting three months.)
Posted by Unknown at 17:20

well spoken! nothing to add.....cheerio

The Thing That Should Not Be said...

I do agree with Moore, up to a point. There currently is NO writer in the field of comic books who can even come close to equalling Moore, in terms of audacity, lyricism and sheer creativity.

Based on the nonsense that Jason Aaron churns out for Marvel, I wouldn't even put him in the same GALAXY as Moore. Yes, I read Scalped, but it didn't GRIP me.
If THAT is the best he can manage then I think Moore can sleep very soundly at night.

Don't get me wrong, I'm not saying that there AREN'T some excellent writers in comics today, it's just that they aren't as good as Moore, and certainly don't have his range.

Jonathan Hickman springs to mind as someone with a range and an interesting creative flair. I greatly enjoyed all of his Image-published work - The Nightly News, Transhuman, Red Mass For Mars etc - and I applaud the fact that he actually made me give a fuck about the Fantastic Four...but I'd STILL take Promethea or Top Ten over ANY of it.

Even work that Moore basically knocks out in his lunchtime for quick cash has more depth than ANY Wolverine title. Smax was witty, charming and clever, and Neonomicon plays around with fundamental ideas in a way that something he basically knocked out in an afternoon just shouldn't be able to.

THAT is what most of todays writers are lacking - RANGE.
Even Grant Morrison fumbles with certain areas, too unfocussed to fully hone in on the finer points of non-fantastical writing. I'm willing to be that not half as many people 'get' Morrison as profess to, which is HIS fault, NOT theirs - I have NEVER not understood what Moore was saying.

Rather than taking his words as an insult, MAYBE writers should see them as a CHALLENGE to rise above the mire of 'slightly-above-ordinary' writing and ascend into the realms of the EXTRA-ordinary.

Except Mark Millar. He can't do it.

Cheers Rich. You've managed to distill everything I was thinking about the way Alan is being attacked especially at sites like BC.