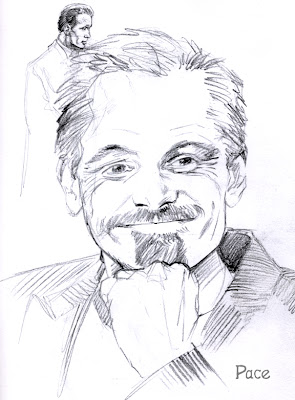 I'm off to see Eastern Promises tonight. It's been getting good-to-incredible reviews ever since it opened during the Toronto International Film Festival a few weeks ago. Pictures of Viggo started popping up everywhere -- I saw a photo of him in a free daily commuter paper with this odd 'stache and overgrown soul-patch with a goofy smile on his face !
Viggo smiling like that? What the hell did Cronenberg do to him in this film?
Had to draw it.
Posted by Unknown at 16:23

found your blog, long time no email :-) Drop me a line, we'll catch up.